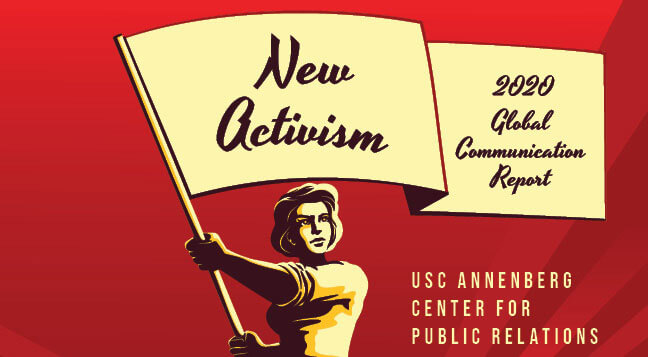 Every year about this time, our industry looks forward to reading the report that has, in the past, examined such topics as the future of media, ethics and technology and has certainly influenced our thinking. This year, the report is focused on a topic that is familiar to us -- activism.  We are familiar with it through the many marches over the years in support of the civil rights movement or against the Vietnam War and, more recently, the March For Our Lives. They have raised awareness through public protests and walkouts, have been engaged with their communities by donating and voting, as well as posting their opinions on several social media platforms and purchasing brands that share their values.

And yet, according to the 2020 USC Annenberg Global Comunications Report, these activists do not qualify as the “new activists.” The difference is that the new ones have goals that go beyond just raising awareness for a cause. As the report says, “they are rooted in achieving authentic social and political change.”

As such, New Activism presents both a challenge and an opportunity for our industry to engage with the new activists, those who play an increasingly powerful role in our work, our society and our lives. These activists are ready to shape new strategies with lasting results. Our industry will need to stay on track and figure out how to tie the activists’ powerful voice with the brands of our clients in order to solve the problems facing all of us together. And it will be the initiative and imagination of the professional communicator to figure out the “how” of it.

Taken today, there still is an existing pessimism among communicators as to the effectiveness of activists. As much as 44% of communicators are convinced that activists are not effective at achieving real change. Even less so, when asked as to their level of influence in the political process. But activism is evolving and with it, will come change.

Nearly two-thirds of us working in the communications industry predict activism’s influence will increase in the coming years. It will offer an opportunity for those of us who are committed to working in tandem with the activists’ influence and folding this in our planned programs for client communications. According to the report, “64% of those who proactively engage with activists report their companies benefit when they do. Activists are even more bullish on working with business: More than 80% think they benefit from the relationship.”

Recent studies show that consumers and employees expect companies and brands to get involved. During the COVID-19 pandemic, that involvement gave us proof as to how that can work with positive results. It can be hoped for this new level of corporate mobilization and cooperation to be applied to other global issues, such as climate change.

Most public relations professionals believe that participation in the electoral process is the most effective way to achieve long-lasting change, rather than with protests and walkouts, which has proved to be far less effective. And activists agree. They place an even greater emphasis on voting in elections (43%) than communicators do (31%). And it might come as a surprise to learn that few modern activists (11%) believe protesting in public is effective long-term.

Both Gen Y and Z have placed voting in elections significantly higher than older respondents. This may explain why March For Our Lives, which began as a nationwide protest for gun control, evolved into a grassroots campaign to register young people to vote. The protester of the past is being replaced by the voter of the future. Surprisingly, both groups agree that television and film are still effective visual mediums for gaining attention for issues and causes.

When asked as to who our new heroes will be, it is worthy to note that the captivating heroes of the past are being replaced by the average citizens of the present. In fact, as this study reports, “29% of activists agree that everyone will be an activist in the future. Some even rank average citizens above CEOs, influencers and journalists.”

As an example, take Greta Thunberg, the 17-year-old student from Sweden. As most will recall, she made the cover as Time’s Person of the Year issue last December. As a matter of fact, some activists believe children will be just as influential as journalists.

And the study zeroed in on us, the PR Professional community, when they noted that, “an overwhelming majority (84%) of PR professionals believe a corporation should take a public stand on issues related to their business. Diversity & inclusion is the number one issue U.S. communicators will tackle, while climate change is the overwhelming concern outside the U.S.”

Agreed. We will lead by taking a stand for our clients and us.

READ MORE: For First Time, CEOs Have Their Say In 2019 Global Communications Report From USC Annenberg