To 4K or Not to 4K? What Marketers Should Consider Before Their Next Brand Video 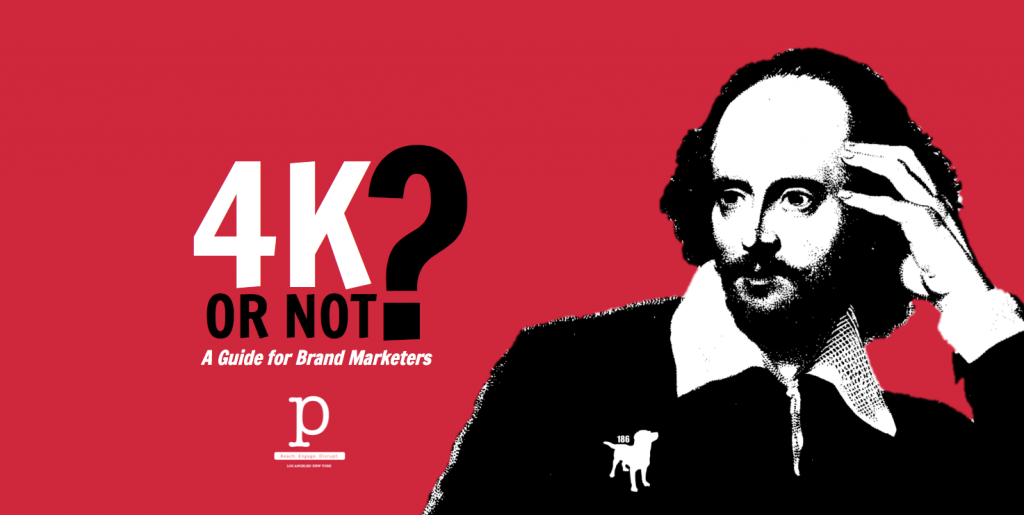 Video content is king and brand marketers are scrambling to get up to speed on the “in’s and out’s” of modern day video production, to ensure they are making the right decisions when it comes to producing their next brand video.   To that point, one of the most frequent questions that we get from clients is why they need to shoot in 4K video format if hardly anyone is watching content on a 4K monitor/TV?

It’s a very logical question that millions of other marketing professionals are also asking.

So, we asked the team at our LAB 186 content creation studio what they thought and then translated their “geek speak” answers into a language that all of us brand marketing professionals can understand.

The term 4K refers to a horizontal resolution of 4,000 pixels and vertical resolution on the order of 2,000 pixels. A pixel is a point of light that, when combined with thousands of other points of light, forms an image.

4K video utilizes over 8 million pixels to create a visual. That’s more than four times the number used by a full HD (1080p) video. The high pixel density of 4K video delivers a massive improvement in picture quality and minimizes degradation when displayed on larger screens.

We’ve Seen The Future, and It Is Very Large and Not Pixelated

Think of shooting in 4K as a method of quality control for the future. Since 4K will become more mainstream over the next year, today’s 4K video footage will still look fresh tomorrow, retaining a long shelf life and meeting broadcast and online standards for years to come.

If you have a crew shooting a video at an event where the footage will be dated immediately and not used again, then you can probably get away with HD (2K). But if you’re shooting a product demo, or a corporate video, interview, etc., that may be used in various forms and circulate online over the next few years, then you might regret not shooting in 4K. In our opinion, it’s better to be safe than sorry.

At this time, there is almost no perceptible difference of 4K video compared to a standard HD image when viewed on a smaller format device such as on an iPhone or tablet. However, the difference in the visual quality of the same image on a 70” 4K monitor is noticeable when compared to that of a regular HD image.

As brand marketers, we think about the potential implementation of video content. What starts out as an online video, may all of a sudden end up being used as a large format promotion when a local retailer wants to use it as part of their in-store marketing, or as a digital billboard. It’s happened to us, and we had to learn this lesson the hard way.

Because 4K utilizes more pixels, editors have more flexibility than when working in a lower resolution format. Simply put, when working with 4K video, an editor in post-production can turn a wide shot into a tight shot without any noticeable loss of quality.

The added flexibility means more options for tailoring the look of your video after the filming is done. Whether it’s cropping out an unsightly background visual that went unnoticed during filming, or the ability to zoom in on a subject’s face to emphasize a point, the post-production versatility that 4K provides can be a great benefit when editing the final product.

Good cinematographers will deliver great original footage, but it’s nice to have the post-production editing options that 4K video allows.

If you ever want to grab images from a video for use in marketing collateral, trade show booths or even small and large format print advertising such as billboards, then 4K is the answer. 4K’s ultra high-resolution video also provides higher resolution still images. An image pulled from a 4K video is crisp, clear and very scalable, without noticeable pixelation.

Furthermore, because you can move from frame to frame, it’s easy to find the perfect still image and then incorporate it into print or marketing materials without the need to set-up a new photoshoot.

The decision to shoot your next brand video in 4K is largely dependent on how you intend to utilize the finished product. As progressive brands look to maximize content reach, it’s definitely worth considering how the benefits of 4K are a valuable asset in that effort.

And, yes, 8K video is making its way into video production, but that’s a topic for later.