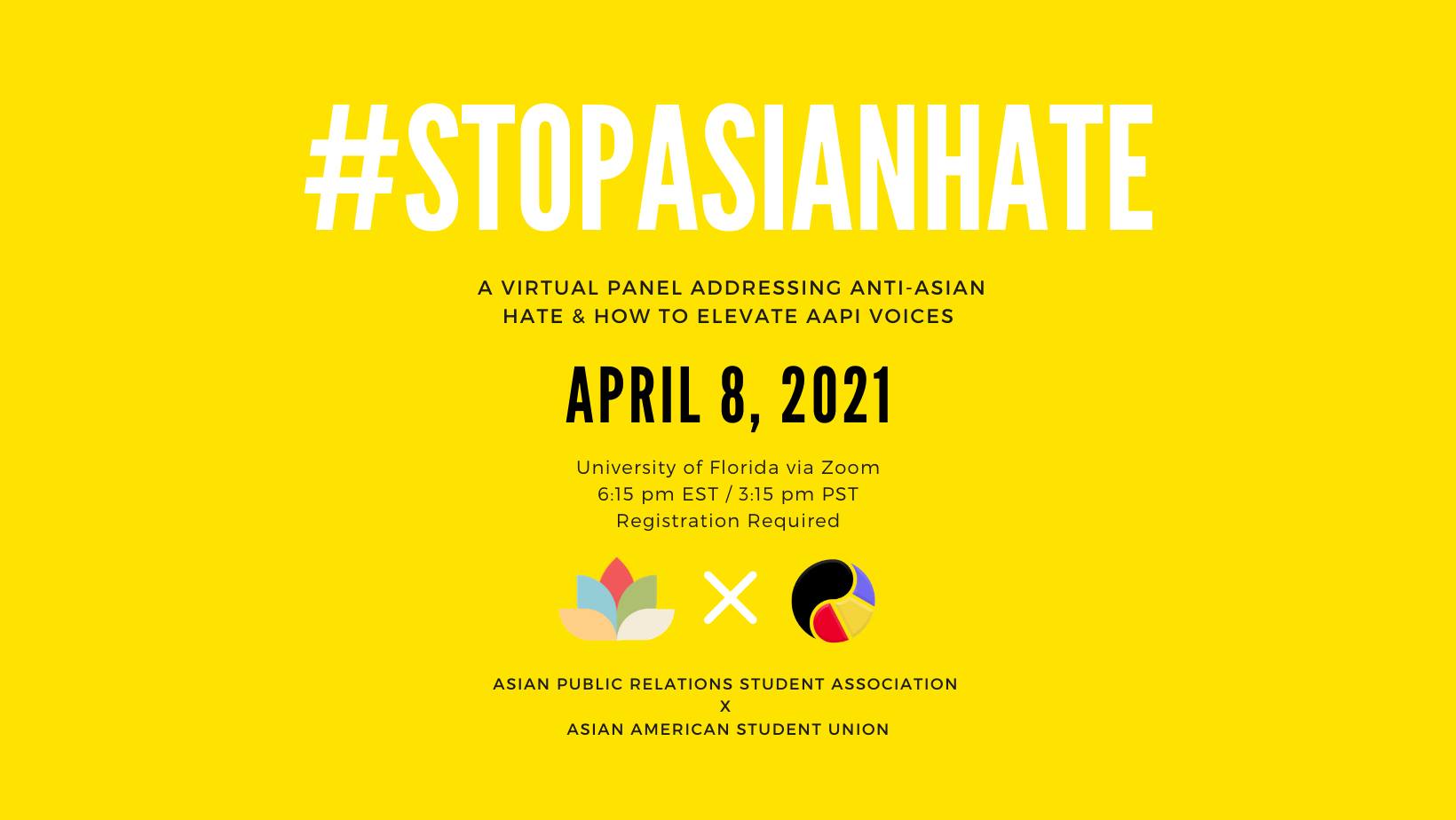 The recent events of violence and racism targeting Asian-Americans prompted the University of Florida’s Asian Public Relations Student Association (APRSA) to partner with its Asian American Student Union (AASU) to host a panel on April 8, to discuss and address the general challenges and solutions that accompany the long-standing problem of anti-Asian hate.

The students and faculty advisors wanted to provide a forum to discuss the struggles associated with being Asian-American, Desi, and Pacific Islander, especially as the national conversation shifts to allyship topics of support for racial minorities, and to standing in solidarity with other victims of hate crimes and violence. The news of the tragic murder of eight people, including six Asian women, in Atlanta was still fresh on everyone’s minds.

The Pollack Group’s Vice President, Jackie Liu, was one of the panelists for the webinar, hosted by Tori Chen, a co-founder of APRSA. The other panelists included Bill Imada, chairman and chief connectivity officer of the IW Group; Jennifer Cho, founder of Pivot & Swerve; Patrice Tanaka, founder and chief joy officer of Joyful Planet; and Laarni Rosca Dacanay, senior communications coordinator at Time.

“I don’t think I've ever cried as much as I have in the last three weeks,” Imada confessed. “It has personally affected me to the point where I doubt this is something we can easily overcome, but I have hope.” That mix of sadness and hope that Imada refers to, was a sentiment shared by all.

Anti-Asian hate cuts especially deep for some panelists, who grew up in predominantly white areas and were bullied as children. For others, it wasn’t until this year that they felt unsafe and perceived as ‘other.’

For Tanaka, the Atlanta shooting felt as significant to her as the murder of George Floyd in 2020, and she wished others felt the same. “When eight people got murdered, six of them AAPI women, I was stunned, but even more stunned that people I knew, colleagues, were oblivious to it. No one said, ‘that was a horrible thing that happened’ or ‘this must be horrible for you as an AAPI.’”

The Atlanta shooting has forced Liu to confront reality and use this time for introspection and reevaluation. “I don’t think I’ve ever thought so much about my identity as an Asian-American until now,” she said. “The hard part for me to admit is that in some ways, very little has changed. No one I know has been personally attacked, yet there have been subtle shifts, and that’s the hard part for me. I’m safe in my own home, but when I step outside to go for my daily walk, I think, maybe I should put some sunglasses on, cover up a little more so they can’t tell, or wear a hat.”

It’s always disappointing to see how quickly we move on from tragic events once the media starts to lose interest. The panelists all agreed that what happens next is clear: it’s up to all of us to keep this momentum going.

“I know some people wish we can just brush this under the rug, but we need to continue to talk about it all the time,” said Liu.

“Not only do we have to be great storytellers, but we also have to be focused on story-living and story-doing. We have to be better about telling our stories,” said Imada.

Panels and speaking events are a start. “We need to tell relatable stories to other communities so we can unify this into a bigger message of education,” said Cho. “We need more events like this and to work more with the next generation.”

Rosca Dacanay urged participants to stay the course and keep these conversations alive. “We need to keep at it. It sounds simple, but we need to keep that drum beat,” she said. “Make sure we are included in those conversations. Keep using your voices and keep elevating other voices. Champion those who aren’t in the room.”

Panelists had plenty of practical and plain-spoken advice for students, who often feel that the push for activism and mobilization falls on them more often than it should.

“Say what makes you feel comfortable, but if you’re a paying student to the [University of Florida] campus, they have a responsibility to do and stand by you, the community, and future students,” said Rosca Dacanay.

“Find the people who have the most influence on the people you want to change,” said Imada, a reference to the well-documented practice of donors and alumni withholding crucial funds until a university cedes to their demands.

“Every single AAPI has to speak up,” affirmed Tanaka. “We can no longer be the silent majority. We must speak up, and we can’t relegate it to a spokesperson, so that we don’t have to speak up. We have a long history of sucking it up and soldiering on. We cannot do that anymore.”

Advice for Allies or Potential Allies

Too often, companies and individuals engage in performative allyship, issuing statements of support that are rarely followed up with meaningful action. What can be done?

To start, “we need to be good allies with the people from whom we want support,” noted Tanaka.

There can be a disparity between calling out leaders for their inaction and supporting employees in their quest to enact change. We can do both, says Cho. “Use your degree. Write letters to leaders. Join in on a conversation. Hit them where it hurts. If someone else is calling someone out on being performative, support them. Help those people who are having those conversations.”

Liu urged people to reconsider their expectations for classmates and colleagues to be allies. “Consider who you’re asking when looking for people to be allies. If you expect someone to jump both feet into the pool of allyship, you may be disappointed. Sometimes allyship is a really small step. Sometimes it’s posting on Instagram for support, not always attending an event with you. Everyone can contribute a little bit in their own way.”

“Inaction is simply not an option,” commented Rosca Dacanay, in summing up the issue, handily.

“Don’t accept the status quo because if we don’t do anything, we’re part of the problem. That means racism continues; prejudice continues, ignorance continues, violence and death.”